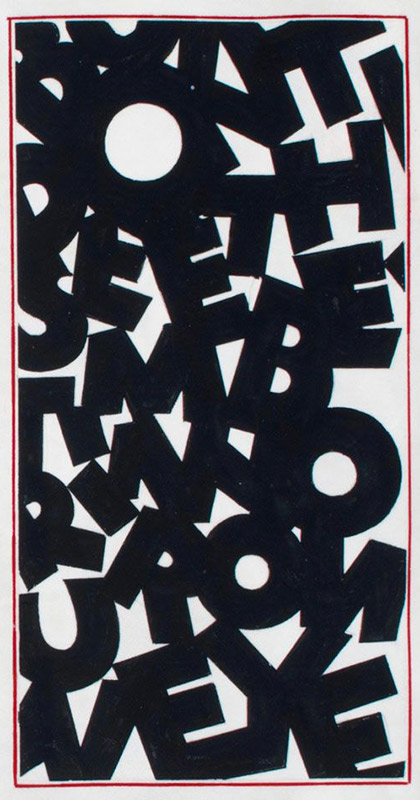 We take language for granted. Imagine trying to communicate even the simplest of messages without words. It seems almost unimaginable that there could be a time without language, but, thousands of years ago, in the time of the earliest humans, pictures painted on rocks and in caves told the stories of our ancestors. These early artworks evolved into some of the most important artworks of all time – letters. Simply, yet elegantly constructed, each letter combined with its brethren forms a powerful symbol that conveys meaning and provides detail to our speech and prose. 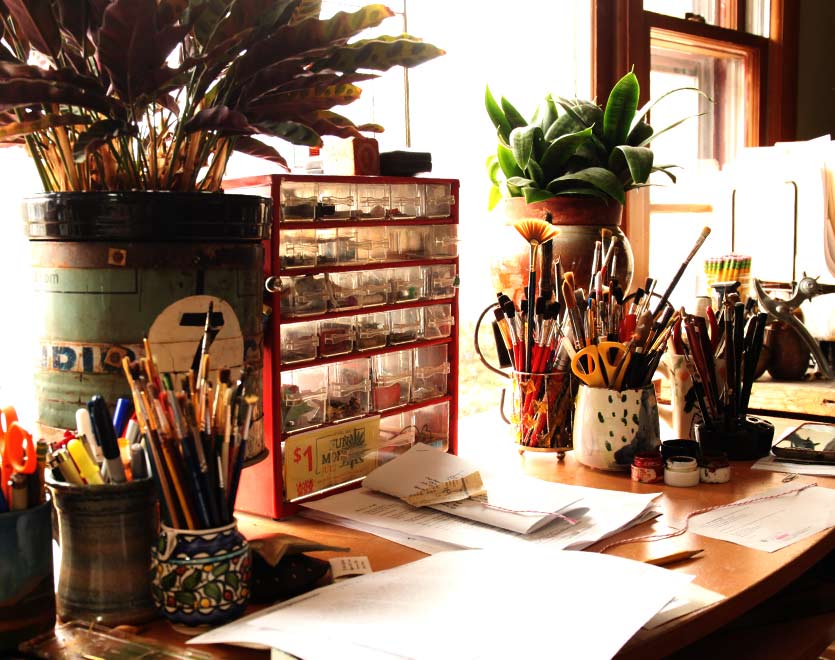 Gutenberg’s mechanical moveable type disseminated written language to those who previously had no access and ushered in the era of mass communication. The world was forever changed, and the letter was no longer viewed as a work of art. Despite this fact, the art of giving form and rhythm to the written word continued to flourish in the form of calligraphy. Calligraphy literally means “beautiful writing,” and is accomplished through the use of various tools (brush, pen, quill, nib) and a multitude of pigments (inks, stains, paint). The breadth of calligraphy is wide, from formal (wedding invitations, certificates, thank you notes, quotations) to modern (abstract letterforms as stand alone art pieces) and everything in between. Mastering the art of calligraphy takes decades of practice and continued education. 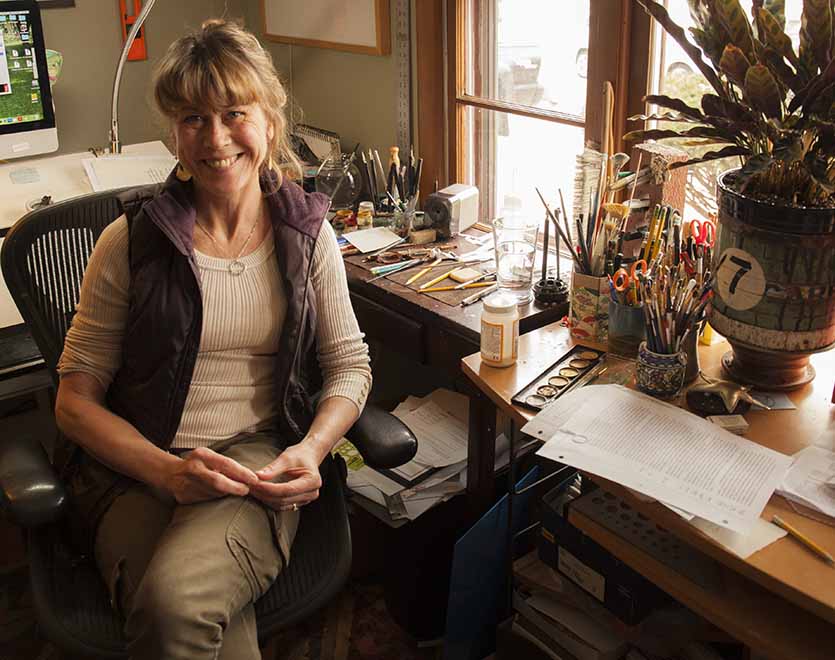 Cheryl Jacobsen in her studio

We are fortunate in Iowa City to have a resident master of calligraphy, Cheryl Jacobsen. Over the course of 30 years, Cheryl has been honing her skills as a professional calligrapher and artist. Her work covers the entire range of calligraphic arts from formal calligraphy to preservation of ancient texts, to contemporary calligraphy and multifarious found-object assemblages. Her interest began when, as a youngster, she received a Speedball manual and nibs from her grandfather. Her interest in drawing and lettering led to a degree in pre-medical illustration. Along the way, she took a foundations of calligraphy course that influenced her more than she initially realized.

While a career in calligraphy was not her initial intent, continued classwork, workshops with master calligraphers, and teaching experience brought about a number of commissions for work, as well as opportunities to teach her own classes. Along the way, she picked up techniques, tidbits of information, pieces of history, and mementos that are now “gifts from her previous self” that have coalesced into a career as a lettering artist and adjunct assistant professor at the University of Iowa Center for the Book where she teaches a variety of classes including history of lettering, and basic and advanced calligraphy. While she still loves to paint and draw, calligraphy has become automatic – a zone where time disappears.

She is quick to credit the influence of her college teacher, Barbara Bruene of Ames, Iowa, for planting the seed that has grown into a blossoming career. Seeing her own students advance toward this goal also gives her great satisfaction. Over the years, she has taken on all manner of projects including transcribing Napoleon letters, creating a book plate for the Oberman Center, reproducing Beowulf in English and Anglo-Saxon, and lettering fine art pieces, quotations, wedding invitations, logo design, banners, certificates, and poems to name a few. 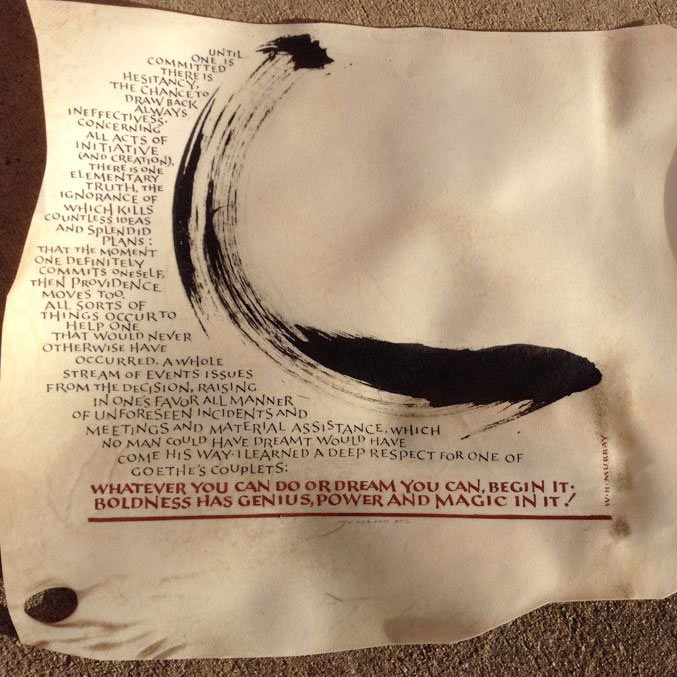 Each one-of-a-kind piece celebrates the allure of letters, the elegance of phrases and restores the human quality to the work. Her clients recognize and seek out this unique expression of emotion that only hand lettering can convey.

“I want to talk to people and see what’s going on in their head and finally figure it out because that whole process is really interesting. There’s usually something I have stored around, either in my head or in my house, that makes the perfect thing.”

The origin of language is art. There is something magical that happens when we put pen to paper and leave our mark. We have left an imprint of our soul, akin to the painter’s brushstroke. There are times when we want the words and the way they are written to work together, symbiotically, to produce a whole greater than the sum of its parts – this is calligraphy.

Cheryl’s work can be viewed on her website cheryljacobsen.com where she is accepting commissions for one-of-a-kind art pieces and timeless keepsakes. 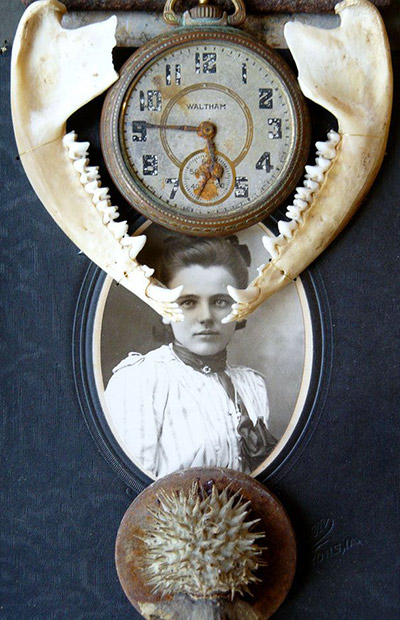 On an entirely different level, Cheryl’s talents combine with her fascination for found objects.
She combines these items in eclectic arrangements that are strong, smart, and witty. Similar to her calligraphy, these assemblages are her way of preserving something that would otherwise be lost. Their construction is liberating, fueling her desire to create. Unlike calligraphy, there are no rules she has to follow, and so her assemblages are a direct outpouring of her creative soul.

“The assemblages are the first time that I’ve really felt like I’m just doing the art that has to come out. I don’t care what anybody else thinks. These things just have to be. They make me happy. I like to live with them. I just have to do them.” 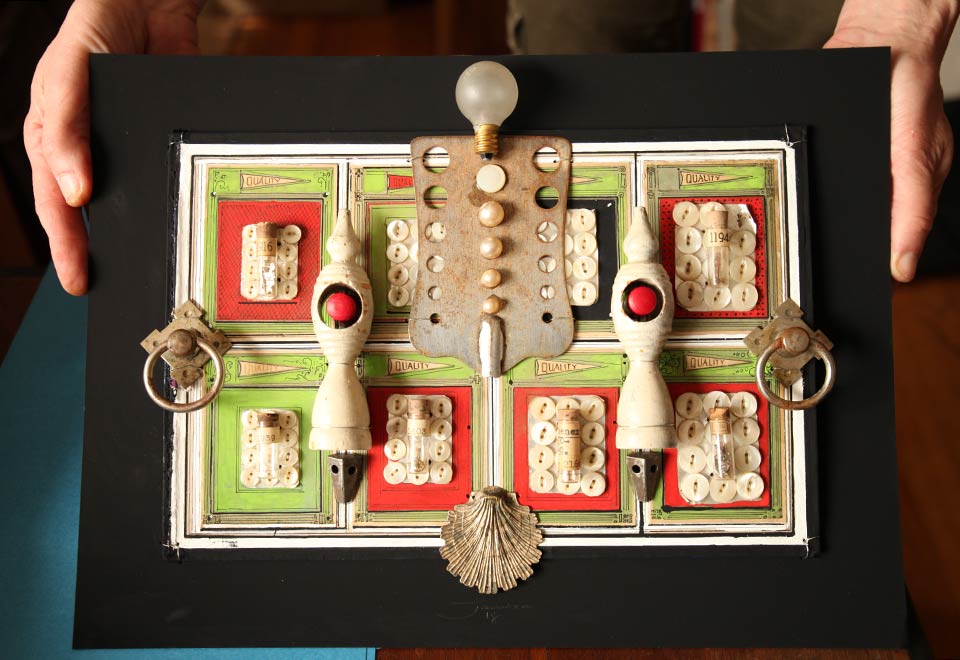 You can see Cheryl Jacobsen’s assemblages on display at the Hudson River Gallery with an opening reception on April 13th.

Previous Post AN INTERVIEW WITH KATHLEEN RASH
Next Post REFLECTIONS ON THE ART AND SCIENCE OF CREATIVITY: CREATING FLOW 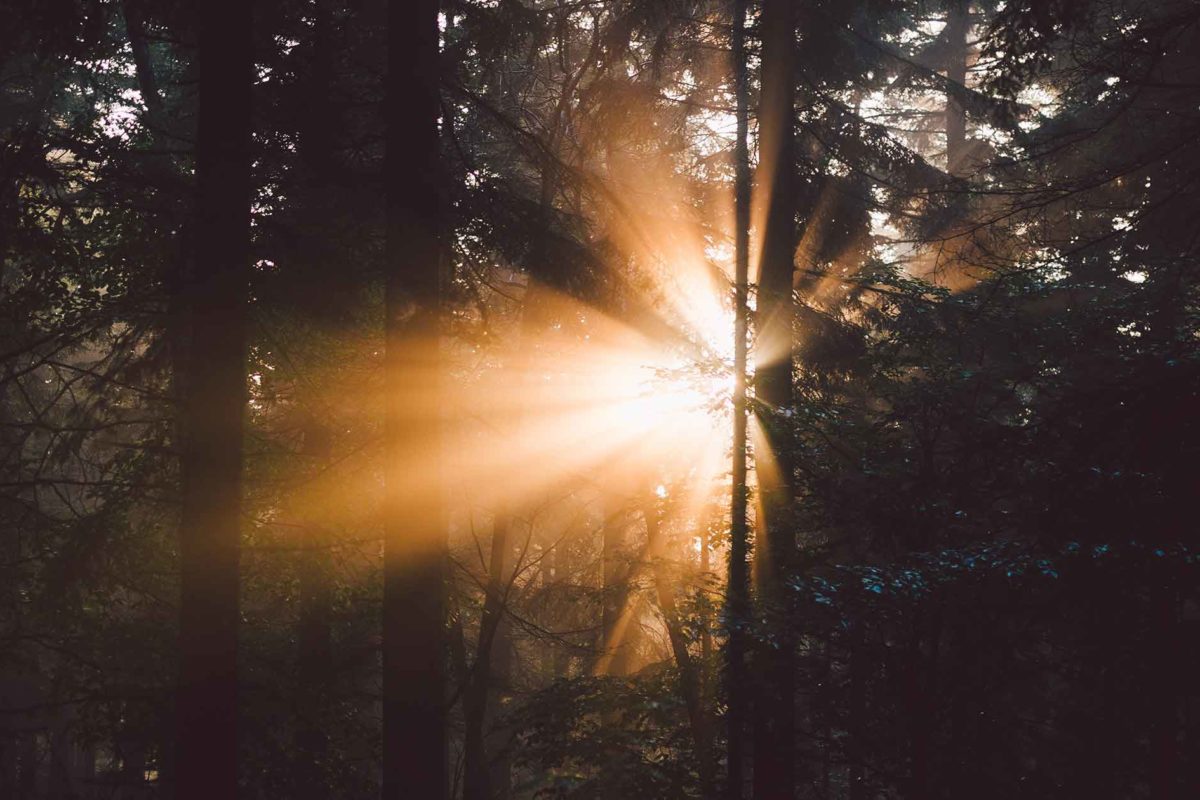 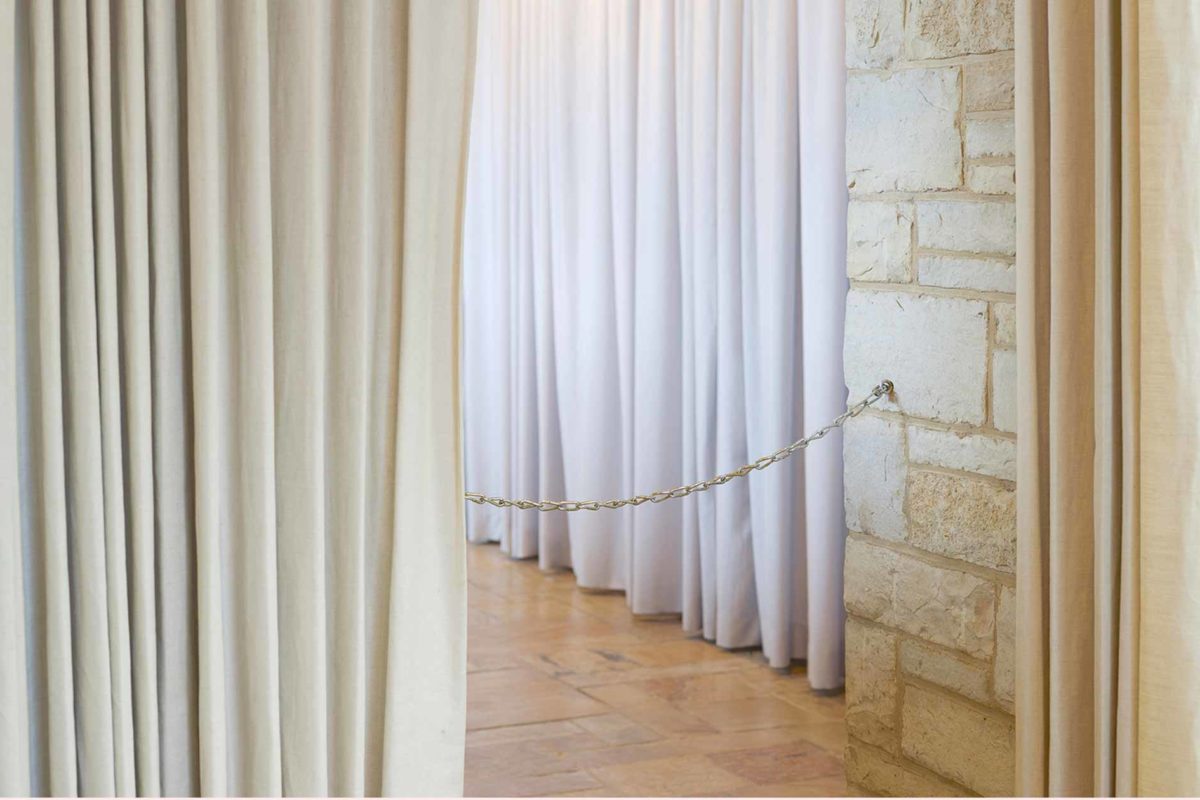 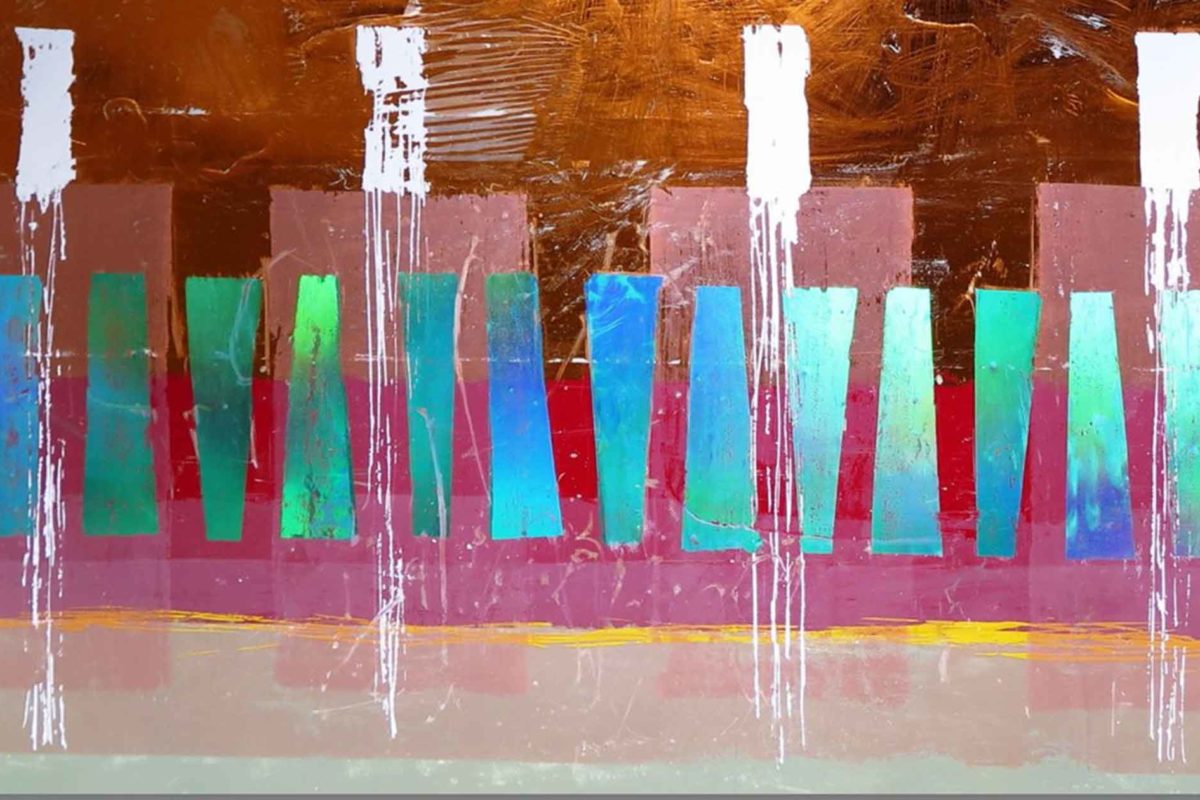 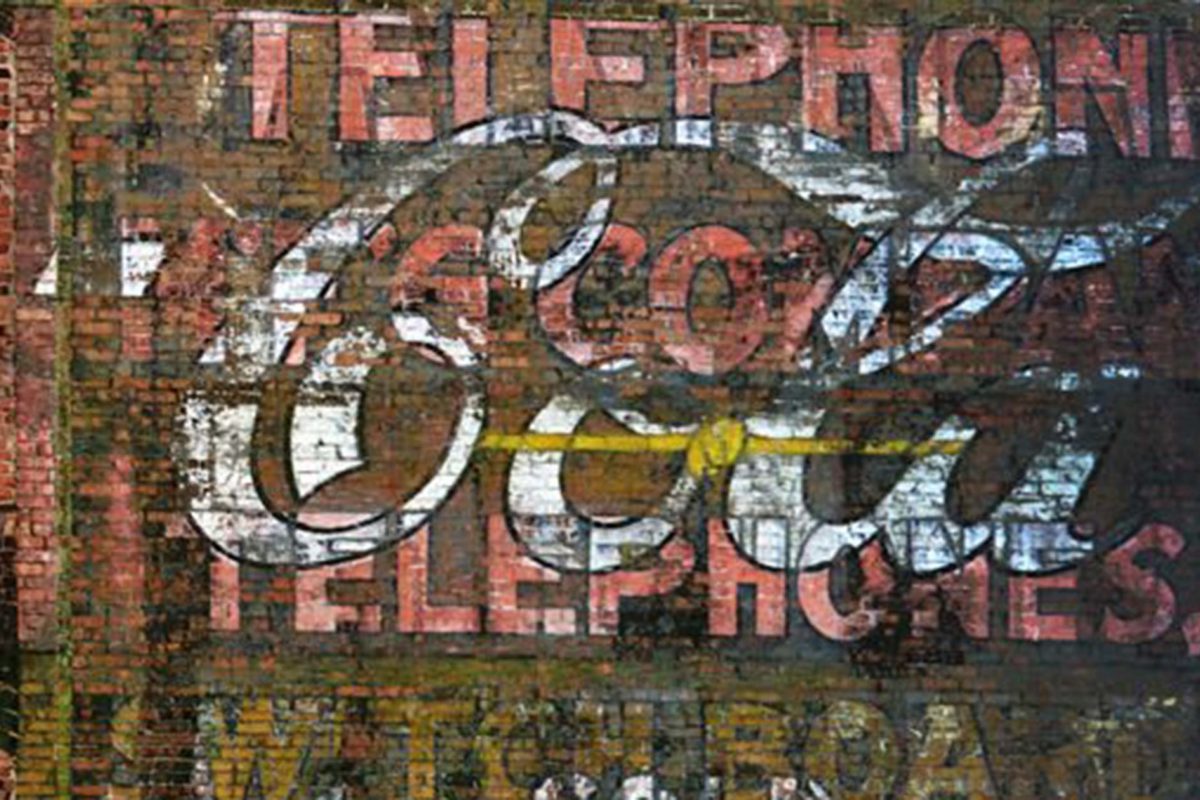 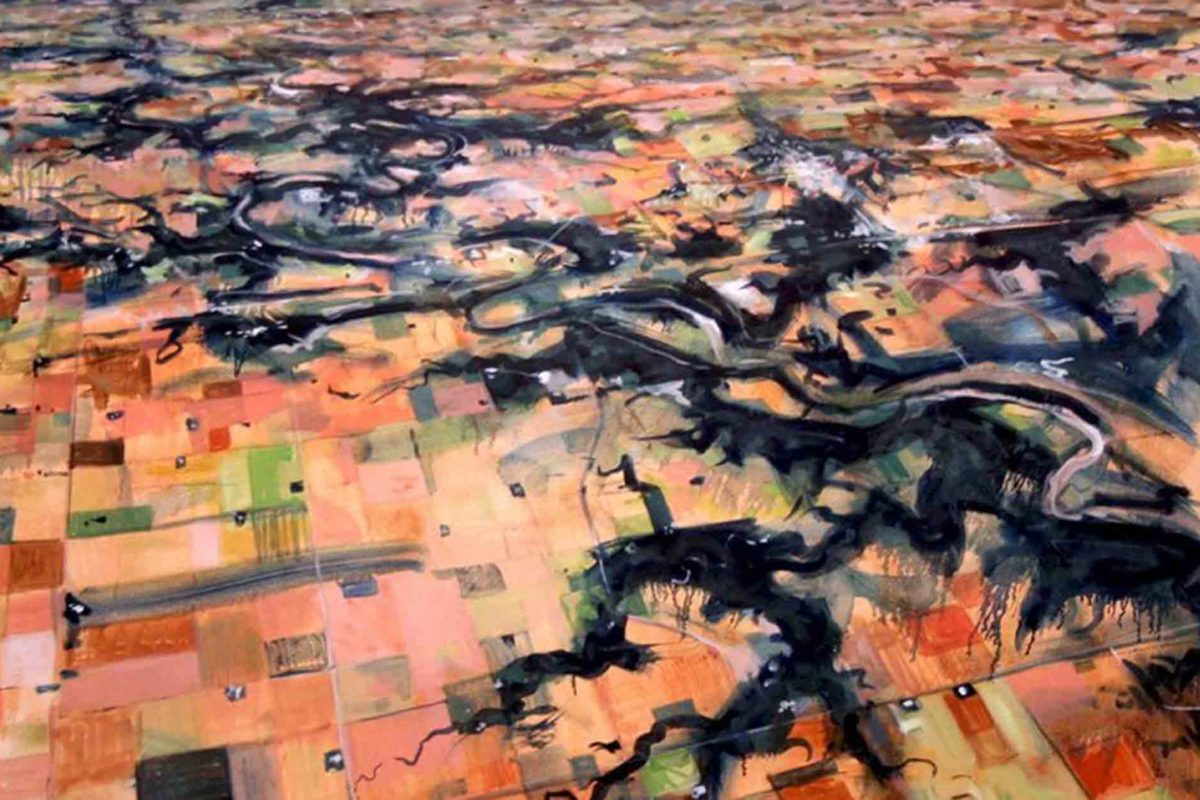 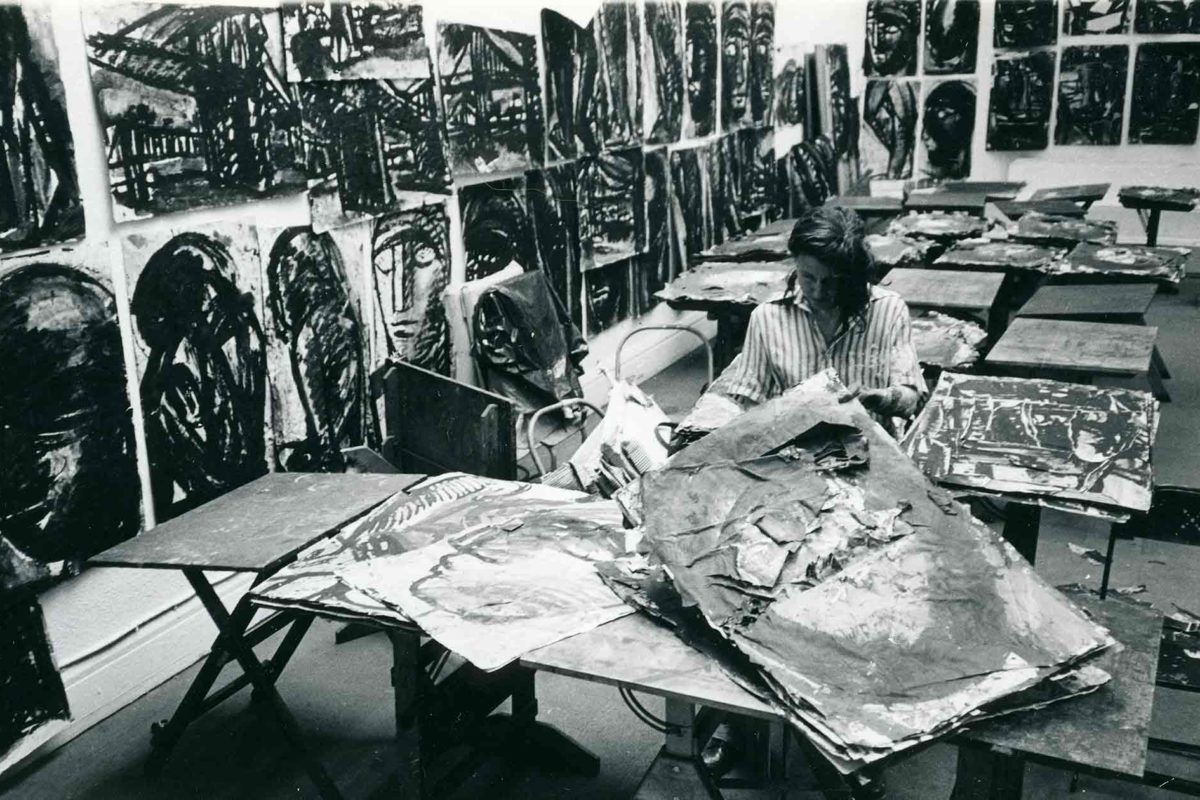 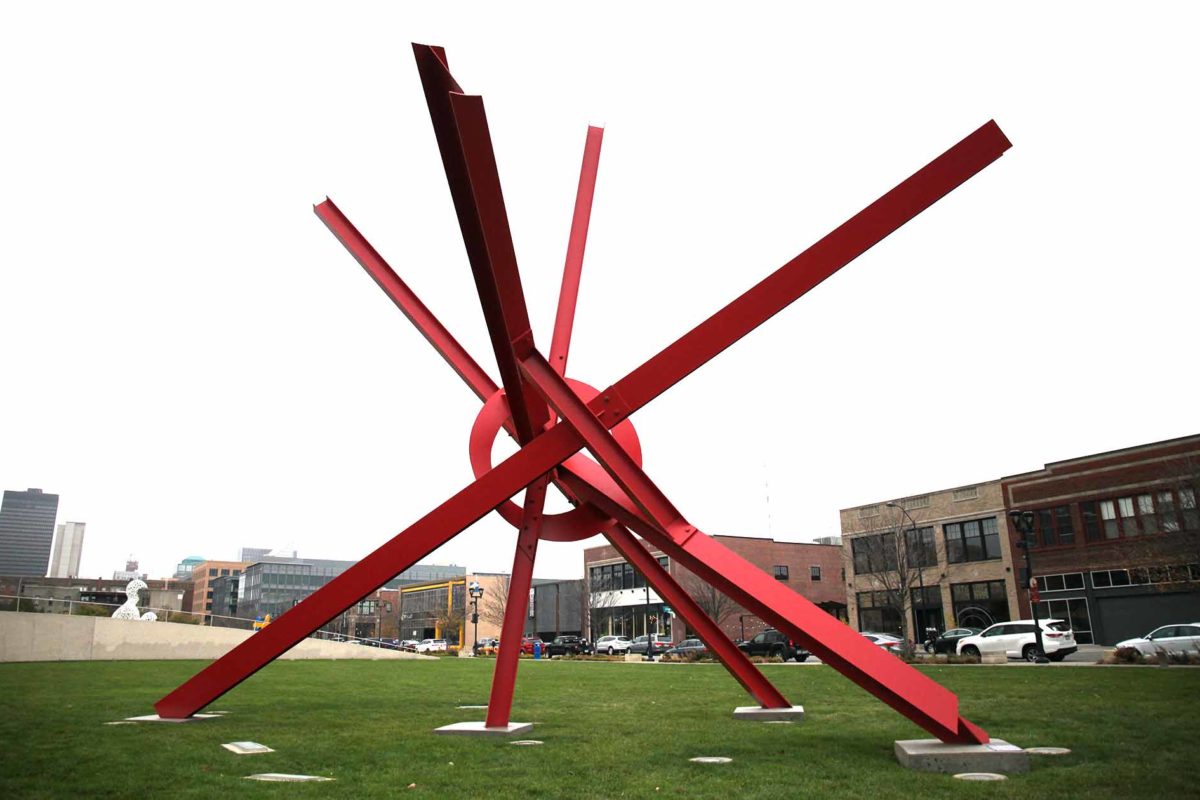