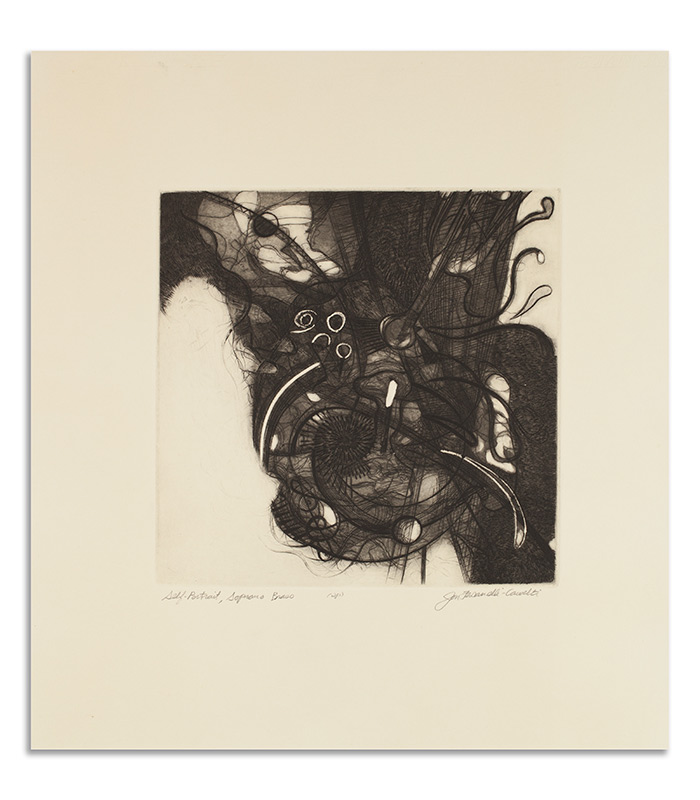 We live in a society dominated by celebrities. We watch them on TV, friend them on Facebook, like them on Instagram, and hang on their every word on Twitter. These stars command considerable salaries in exchange for this continual access to their lives. You can see a list of the highest paid celebrities in 2017 at https://www.forbes.com/celebrities/list/. With stardom comes pressure, and we read about their altercations, allegations, infidelity, divorces, rehab stints, etc.

On the other hand, there are those who live their lives in relative obscurity doing awe-inspiring work. It is these unsung pathfinders that I turn to for inspiration. Is it that they hold the sway of public opinion? On the contrary, public opinion has no bearing on the life they live. They are artists who are driven by their passion, inspired by their experiences, and fueled by their curiosity. While these artists won’t be found on any highest paid lists, they enjoy a different sort of wealth, one of happiness and fulfillment. 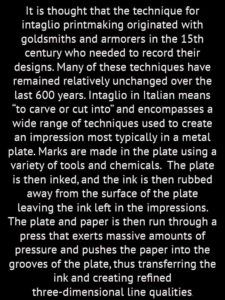 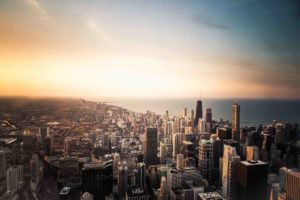 Take Jon Fasanelli-Cawelti for instance. Jon is a printmaker specializing in Intaglio (pronounced In-tal-yee-oh) printmaking for the past 40 years. He grew up on Chicago’s South Side, studied history at Ripon College (1971-75) and then transferred to the Art Institute of Chicago in 1976.  Looking for a change, on the advice of his father, he came to the printmaking department of the University of Iowa in 1978. One of the first interactions that he had was with Virginia Myers (1927-2015). Upon meeting Jon, she explained the technique of engraving with a burin, demonstrated it to him for over an hour, and then gave him the very burin she was working with.  He immediately knew he was in the right place. He found himself entrenched in the bustling printshop directed by Mauricio Lasansky who had come to the University of Iowa in 1945 and founded the printmaking workshop. There, Jon learned the intricacies of intaglio, the subtlety of line, the formulation of color. He obtained his B.F.A, M.A., and M.F.A. in printmaking in 1985. 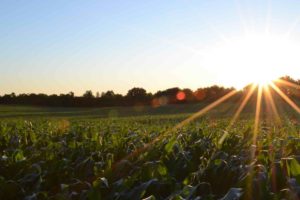 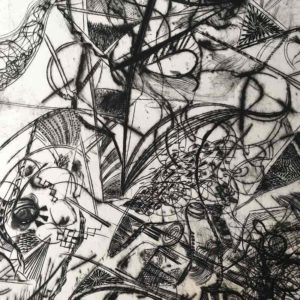 Following the completion of his degree, he continued working as Lasansky’s personal assistant and printer from 1985 – 1998, helping with the incredibly labor-intense process of printing the large scale prints Lasansky was famous for. In 1987, Jon obtained a printing press and began working on his own body of work. His subjects stem from his inspirations –  his family, the outdoors, and an appreciation of life in general. His passion for what he does is inexhaustible. Start talking to him about his work and you become enthralled with his knowledge of history and art; how he intertwines the two by putting the burin to the copper plate and telling a story with these impressions. Multiple hours are spent tediously working each copper plate prior to going through the press. 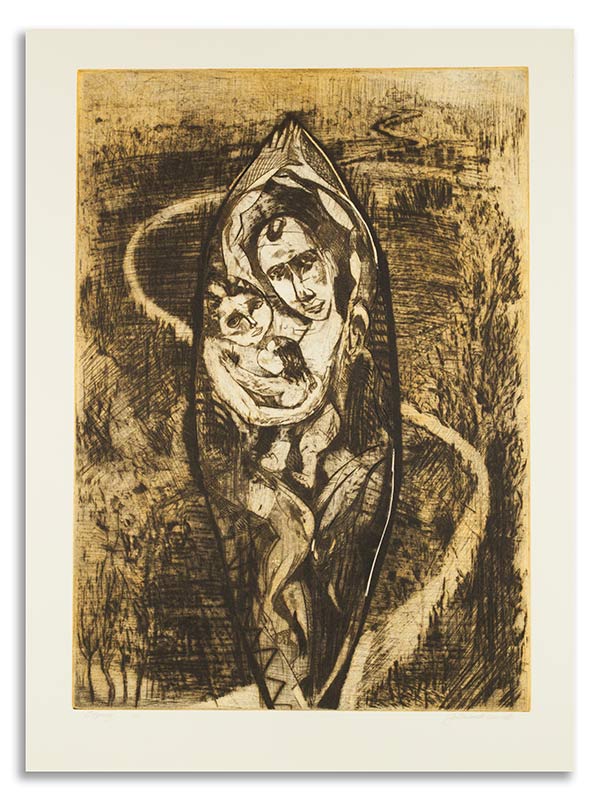 While his artistic drive and passion are unmatched, his greatest delight is his family. His wife, Diane, is an integral part in the business, serving as advisor, critic, accountant, promoter, and model. Their two daughters share in the couple’s love of the arts and are an enduring source of pride. Jon’s wife and daughters are recurring themes in many of his works. In fact, numerous plates were engraved in the fringe hours while on family vacation. He has also paid homage to his heritage with prints like Portrait of My Grandfather.

As if printmaking wasn’t enough, Jon has multiple other interests including music, history, and outdoor pursuits, many of which have been subjects in his work. For instance, when he finished working with Lasansky, he had much more free time and wasn’t sure what to do with it. A year later, he found himself practicing his high school trumpet after a twenty-year hiatus. Like everything else in life, Jon was fully committed to this endeavor, and soon found himself playing in 5 musical groups including the Muscatine Symphony Orchestra. This sparked a whole new series of fifty music-based prints, including such works as Man Filled with Music, Jazz is the River Burning, and Desperate Cornet Shimmie. 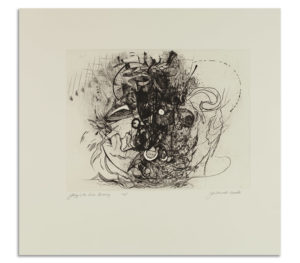 Jazz is the River Burning 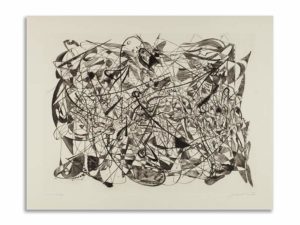 Spending time outdoors has been important to Jon throughout his life. You will find evidence of decades of hiking in Wyoming, pond hockey, and family camping scattered through his images.

You will also find reference to these activities in some of his more recent work, such as Fantastic Walk, The Foot Parade, Hiking from Memory/Mr. G.D. (Gait Disturbance).These works reflect Jon’s memories of hiking and walking, as he is no longer able due to an unclassified hereditary motor neuron disease, something similar to ALS. The disease first manifested in his feet, causing difficulty going up and down stairs; he was diagnosed with a gait disturbance. 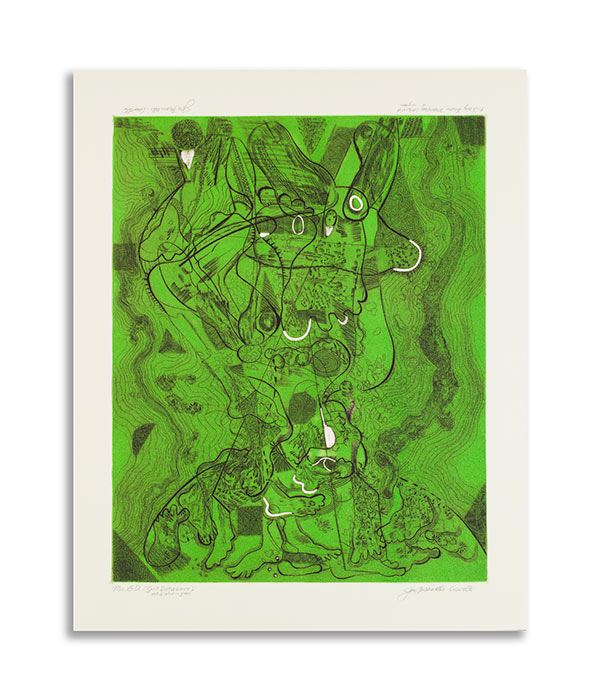 As his disease has progressed, his work has become more abstract in that there is no longer a horizon. He attributes this to being off his feet in a wheelchair. Jon knows his disease will eventually rob him of the ability to engrave copper plates. That being said, he persists with a strength of purpose and unmatched determination to preserve his memories while maintaining the vanishing art of engraving. In fact, he attributes the production of thousands of prints over his career to helping maintain strength and slow the progression of his disease.

Jon has never been one to promote his work.  In fact, it has taken considerable persuasion to make this post happen. He has no interest in being a celebrity or having a place on social media. His goal is simply that people will find inspiration in his work.

As one truly inspired fan, I hope you will read this article and help me share his story with the world.

“The most authentic thing about us is our capacity to create, to overcome, to endure, to transform, to love and to be greater than our suffering.” ~Ben Okri

Previous Post A Sculptural Highlight Reel with
50 Sculptures You Should Know
Next Post THE INTERVIEW THAT NEVER WAS: REMEMBERING PETER FELDSTEIN